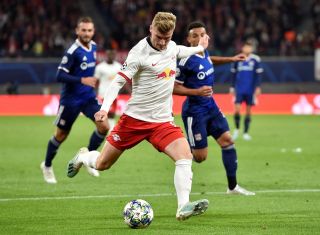 Manchester United are keen to sign German striker Timo Werner, according to reports.

The Daily Express is reporting that the Red Devils are interested on a deal to bring the 23-year-old to Old Trafford as Ole Gunnar Solskjaer searches for a goalscorer in the coming transfer windows.

Although we are unlikely to land him in January, there’s good reason to believe Werner would jump at the opportunity to join United.

The RB Leipzig striker was previously interviewed by Four Four Two — admitting he dreams of playing in the Premier League with Manchester United topping his preference list.

“Yes, playing in the Premier League is a dream for me,” Werner said in the April 2018 issue. “I would like to play for two or three clubs, and Manchester United are one of those clubs. But probably mot in the next few years — later, when my English is a little better! I’m very comfortable at RB Leipzig, though.

“Manchester United and Liverpool were the teams I watched quite a lot in England. They were the two that I’m a little bit a fan of, because they have so much history. When Alex Ferguson was the coach, United won everything and were outstanding.

“In Liverpool it’s also their stadium and the atmosphere. But when I have to decide, I’m more Manchester United than Liverpool.

“I’m now at a point where at some stage in the future I’d like to play in a team that wins titles.”

Admittedly, if it was for the end of that quote, the mention of winning titles, I’d probably get overconfident and bank on it.

But it’s interesting that Werner went on record — whilst contracted to RB Leipzig — saying he dreams of playing in the Premier League and is a fan of United.

The Liverpool Echo have even looked at what role Werner would play if he ended up at Anfield at any stage, with the rumour mill doing the rounds on Merseyside too.

The Red Devils have been left short on options up front this season after allowing both Alexis Sanchez and Romelu Lukaku to leave in the summer.

Werner have been in great form for RB Leipzig in recent seasons, scoring 68 goals in 124 games across all competitions.