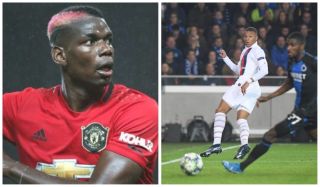 Real Madrid are reportedly set to concentrate their efforts on signing PSG and France sensation Kylian Mbappe — instead of Paul Pogba.

The La Liga giants are always on the lookout for marquee signings and Spanish outlet AS claim that they will have to choose between the French pair, as cited by the Manchester Evening News.

And, it sounds like Mbappe will win this one out, which could be very good news for United.

The PSG superstar ensured that the Ligue 1 champions would make it three wins from three in Tuesday night’s win over Club Brugge in the Champions League, despite starting the game on the bench.

Mbappe scored a hat-trick after replacing Eric Maxim Choupo-Moting with 52 minutes on the clock, so you can see why Real Madrid would prefer him to our midfielder. He wins games consistently.

Kylian Mbappé is just too good for this game 😩

Sending players for hot-dogs in Brugge…

He has a hat-trick tonight 🙌 pic.twitter.com/sKEJiSgQ85

Last night saw Mbappe break the record set by Lionel Messi more than a decade ago — to become the youngest player (20-years and 306 days) to reach 15 Champions League goals.

Pogba, on the other hand, is currently out nursing an ankle injury and travelled to Dubai as part of his recovery during the international break. While there he met with Real Madrid manager Zinedine Zidane which added fuel to the transfer speculation.

His future will be up in the air again next summer, so it will be interesting to see how this plays out and if Madrid will really prioritise one of these French stars over the other.