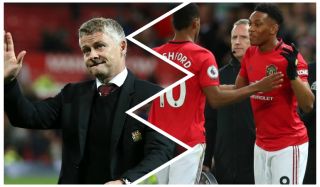 Manchester United travel behind the Iron Curtain to Serbia for our third Group L game looking to end our torrid run of eleven away games without a win.

Ole Gunnar Solskjaer’s side are second in our section on four points from two games having beaten Astana and drawn with Astana so far. On paper, this is our toughest away game in the group and so it holds sway for Ole to make a strong selection, even with one eye on Sunday’s Premier League trip to Norwich.

Here is how we think United will line up at the Partizan Stadium with Solskjaer to revert back to a 4-3-3 formation.

Romero was denied his big moment against Liverpool as David de Gea returned from injury sooner than expected. The Argentine usually gets his chance in game such as this, and is excellent back up. DDG played last time out in this competition against Alkmaar, but Romero is set to be restored.

Wan-Bissaka’s return came as a welcome boost against Liverpool, and is set to continue his comeback with a European debut. Having started further forward as a wing-back in the draw with Jurgen Klopp’s side, AWB is likely to revert to a more familiar right-back role in Serbia.

Axel Tuanzebe and Eric Bailly are both on the treatment table with Solskjaer’s first choice pairing of Harry Maguire and Victor Lindelof to be rested. Jones has been restricted to two appearances so far this season but with all that in mind, he is the only option to come in alongside Rojo, who has played in both Europa League ties so far. The thought of these two together in the defence is enough to bring you out in a cold sweat, and if Partizan are worth their weight in gold they will exploit a glaring weakness.

With Luke Shaw still not fit, the left-back spot is a straight shootout between Young and teenager Brandon Williams. Solskjaer will probably go with experience and stick with club captain Young for this one. He will skipper the side and revert to his more favoured left-back role having played as a wing back at the weekend.

McTominay was immense against Liverpool and is an early contender for United’s Player of the Year (although admittedly that’s not saying much). He has been a rare figure of calm authority in these turbulent times at Old Trafford. McSauce has been held back in Europe so far but with the Reds in need of a win in Belgrade, he has to play.

What are we going to do with this player? Terrible against Newcastle, quietly impressive against Liverpool. He seems to save his best performances for when it matters most. Nemanja Matic and Paul Pogba are injured, so with United down to bare bones Solskjaer has very little choice for his wafer-thin midfield.

Pereira had probably the best game of his United career against Liverpool playing off the two strikers, a game that also showed he’s better centrally rather than out wide where he has often been stationed this season. He linked the play superbly, got stuck in and was involved in the goal. We expect to  himstart here, but if he does it must be in a 3 and not out wide.

United lack options in this position with Jesse Lingard injured and Marcus Rashford set to be afforded a breather. Mata is more of a squad player these days and is useful in games where United need someone to pick the lock. What he lacks in pace he makes up for in mind.

Martial made his first appearance since August as a late sub vs Liverpool and will get more minutes in this one. We don’t expect him to play the full 90 minutes, but Martial is expected to once again take up his central role. Even though the Frenchman is fitfully inconsistent, United’s attack is better with him at the apex.

Another who had another superb game against Liverpool. James looked like he’d rather die than lose on Sunday and continues to defy expectation having made the step up from the Championship. Despite being kicked from pillar to post on a weekly basis, he’s James just keeps coming back for more. The epitome of what United should symbolise, James has resilience, guts and determination by the bucketload.