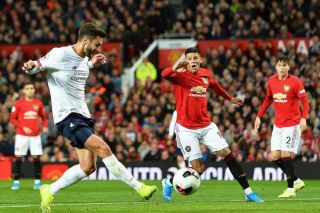 Marcos Rojo has not given up on getting into Ole Gunnar Solskjaer’s line-up after playing a full 90 minutes against Liverpool at the weekend.

Academy graduate Axel Tuanzebe was named in the starting eleven but had to pull out after sustaining an injury in the warm up. Solskjaer was left with no other choice but to hand the Argentine his first start of the season against the Scousers.

Apart from Adam Lallana’s late equaliser, Rojo was solid at the back during the 1-1 draw, alongside Harry Maguire and Victor Lindelof in defence consisting of three centre-backs.

United adopted a new 3-4-1-2 formation and it worked against our arch rivals.

The 29-year-old was subject of interest from Everton on deadline day, as per Sky Sports, and it looked like he could leave with Maguire’s arrival pushing him further down the pecking order at Old Trafford.

The Argentina international is now eyeing a more prominent role in the team following that failed summer transfer, with one eye on next year’s Copa America in his homeland.

“I’m happy here. I want to play; I want to be a regular,’ Rojo told The Athletic.

“My best position is a central defender, that’s where I want to play, but I’m happy to be used as a full-back too. I’m in very good condition this season. The pre-season was right and I’ve not been able to say that in other years because I’ve had injuries.

“I love it here. It’s tranquil. My daughters are fully adapted here. They speak perfect English, my family is happy here. I can speak some English too. I’ve been here in the first team for longer than any other club in my career. I’m happy, I just want to play more.

“It’s a big season for me – I want to play in the Copa America in my home country next year too.”

Rojo has made just three appearances across all competitions since the start of the 2019/20 season. He will be hoping his display against Liverpool makes Solskjaer think, and that could hand him a place in Thursday night’s Europa League clash against Partizan Belgrade.

It still remains to be seen what the long-term future holds for Rojo, with his current contract set to expire in 2021.