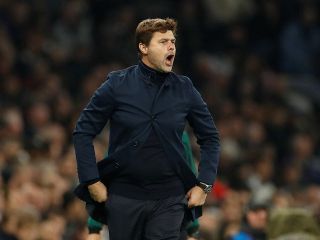 Manchester United and two other European giants are keeping tabs on Mauricio Pochettino, as reported by The Athletic.

Real Madrid and Paris Saint-Germain are also said to be watching what unfolds at Tottenham after a challenging start to the new season.

Pressure is building on Pochettino with the North London club sitting 7th in the Premier League on just 12 points. They’re already out of the Carabao Cup after losing to League Two side Colchester in the third round and recently suffered an almighty beating (7-2) against Bayern Munich in the Champions League.

Despite all that, the 47-year-old is still highly regarded by United, Real Madrid and PSG.

Pochettino has been long linked with a move to Old Trafford.

Spurs hammered Red Star Belgrade 5-0 at home in the Champions League on Tuesday night, and he had this to say about his job beforehand:

“That is football,” the Argentine coach said, as quoted by the Daily Mirror.

“It is the same as when people praise you when you do well.

“If you don’t perform as people expect, it’s normal. Football is always about winning today. What happened yesterday is gone.

“Managers and coaches always need to win, today and tomorrow. Sometimes we think too far ahead. People sometimes say ‘Come on gaffer you are thinking too much’. But we need to think about today.”

The article in question by The Athletic (subscription required) is worth reading as Oliver Kay compares Pochettino’s struggles this season to Jurgen Klopp in his final year at Borussia Dortmund.

I think Spurs need to sit tight and back their manager. After all the talk about him leaving for United and Real Madrid last year, he guided them to a Champions League final and stayed put. Maybe his time for a big move will come soon, who knows, but Daniel Levy should be willing to let him build a new team because this one is starting to feel jaded.

As a fan of Pochettino, I’d one day like to see him in the hot seat at Old Trafford. Not now as I still back Ole Gunnar Solskjaer’s long-term views and believe our current boss has made sacrifices that will put us in a better position going forward, especially for whoever takes his place as United manager when that decision needs to be made.

Time will tell if Poch and Ole can get their teams back to winning ways in the league. That’s the bread and butter of football.