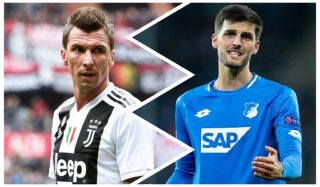 The international break is behind us, and domestic football returning means we have something to sink our teeth into but thoughts are starting to drift to who might come in January. Now with Solskjaer under enormous pressure now, a lot of people don’t think he will make it until then.

Personally, I think he will, and he should so I am going to look at three players who all would be available for United in the notoriously difficult January Window.

In the last few weeks it does seem the move for Mandzukic becomes more likely, numerous reports as per Calciomercato consider this to be as close to a nailed on move as can be. It was reported United came in for the Croatian Striker in the summer but failed to get the deal over the line.

Now it would be a great time for him to come to Manchester as United are in desperate need of reinforcement up front and Mandzukic can not only play as a lone striker but also as a winger. His physicality is obvious, but he offers so much more than that, his ability to press and his tactical intelligence are just some of the reasons why he has played under the best Managers in the world. Diego Simeone, Massimiliano Allegri and Jupp Heynckes are just three of the managers Mandzukic has won silverware with at Atletico Madrid, Juventus and Bayern Munich respectively.

One of his biggest attributes is his ability to perform in the biggest games with his mentality and technical quality shining through on many occasions. He has scored in two Champions League finals for Juventus and Bayern Munich and also a World Cup final for Croatia in 2018, his work rate and defensive contributions also may also help United in the second half of the season and beyond. His character would be perfect to add into a dressing room with a leadership and character void, his experience and determination would be something the young players in this squad may need as well as the nous picked up winning numerous trophies in different countries.

This will help United as the burden on Marcus Rashford and Anthony Martial will not be so much allowing them to rotate and be rested when needed, Mandzukic was also left out of Juventus’s Champions League Squad as Juventus have Cristiano Ronaldo, Paulo Dybala and Gonzalo Higuain ahead of him in the pecking order.

Another Croatian who is seemingly close to the exit door at his current club is Ivan Rakitic, the Barcelona midfielder has lost his role at the Spanish club and they will listen to offers for him in January.

The 31-year-old would come into a very threadbare United midfield and instantly add quality and composure on the ball something in which United have been drastically lacking. Another player who has won multiple titles are Barcelona as well as winning and scoring in a Champions League Final for Barcelona against Juventus in 2015. He also won numerous Copa Del Rey titles with Barcelona as well as the Europa League with Sevilla, as well as being a pivotal part in Croatia reaching the World Cup Final in 2018.

Rakitic is an intelligent and supremely gifted technical midfielder, he can play a number of roles in midfield due to his technique and fitness. His vision and passing mean he would provide United with someone who can not only keep the ball but break the lines of the opposition putting United in more dangerous attacking areas. His arrival may also help Paul Pogba play further up the pitch as Rakitic has the defensive skills to allow Pogba further up the field to influence play. He played behind Lionel Messi for Barcelona covering for his lack of defensive work over the last few seasons and he could do this for Pogba.

An obstacle with this is that Inter Milan are also heavily linked but United might have an ace up their sleeves in their pursuit of Rakitic in current United Player Nemanja Matic. Inter Milan boss Antonio Conte is an admirer of Matic from his Chelsea days so this could give United the option of selling him to Inter to have a free run at Rakitic.

Lastly after the El Clasico last season in which Rakitic scored the only goal in a Barcelona win at Real Madrid, Jose Mourinho working for BEIN Sports as a pundit described Rakitic as “One of the most underrated players in the world”.

“He’s one of the most underrated players in the world.

“He needs to improve his Instagram and social media because in this moment this is very important and he’s not very good on that but he’s very good on the pitch!”

Now this one is a signing that would catch a lot of people off guard but bear with me on this, United struggle to control midfield and this might just open the options up the pitch. Grillitsch plays for Hoffenheim in Germany and while this year has seen them regress slightly after losing their manager Julian Nagelsmann to RB Leipzig, he continues to be a key player for them.

Under Nagelsmann they played counter-attacking football so his vision and passing accuracy was key in the transition, Hoffenheim scored 9 goals direct from Counter Attacks last season so he would fit in Solskjaer’s system very well.

His physique, position and attributes mean the comparisons to ex player and current Manchester United coach Michael Carrick will be very easy to make as the fact he wasn’t the player in a very good Hoffenheim team winning all the accolades even furthers the comparisons.

His stats back up the fact that he wins the ball back through tackles and interceptions, technically very good with both feet mean he won’t be fazed receiving the ball anywhere on the pitch. Naturally he would have to adapt to a more physical and higher tempo league, but I think that he would become a mainstay within a few months should he join.

United have problem in that when playing against teams that play defensive against them, they really struggle to break the defensive lines of the opposition. Often passing around the back and from side to side Grillitsch would be able to play passes to break those lines when in possession, also his range of passing would be essential in the transition of defence to attack especially with the pace United have on the break.

Hoffenheim have lost their manager and have not made a good start to their season so far, although they did beat Bayern Munich away before the International break. So there is a very real prospect that he is available in January, United would probably have to pay north of £30m but they have paid bigger fees for worse midfield players so this would be a smart signing and one that makes sense but we all know that United’s recruitment policies often don’t so what better way to show the change of direction than this.

Now I include this because sometimes a player might just be the spark that a club needs to rejuvenises a team and Everton Soares might just be that player. A right footed winger capable of playing all across the frontline, the Brazilian is already a staple of his club team Gremio and is already making big strides in the national team.

With Neymar unavailable for the Copa America last summer Everton took his place and the biggest compliment I can pay him is that the PSG forward’s absence was not felt at all. Brazil won the competition and Everton performed brilliantly well even winning the Golden Boot with 3 goals on minutes played. Gremio currently at the time of writing this are in the Semi Final of the Copa Libertadores and he has scored 4 goals in that competition, he has played over 100 games for Gremio at 23 so even at a young age he has plenty of experience.

He is pacy winger who brings goals to the team, United have been crying out for a winger for years and someone who will get fans off their seat. He was subject of interest by Arsenal and AC Milan in the summer, but both opted for different players instead. With the Brazilian season ending in December it may be the perfect time for United to strike a deal, I think this would be the most eye opening but if Jadon Sancho is worth north of £100m then United could add a player with great potential for less than half that.