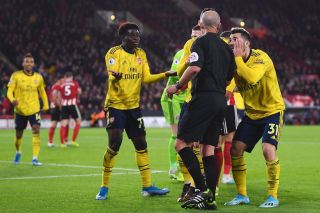 Patrice Evra was critical of Arsenal after watching them lose away to Sheffield United on Monday night.

The former Manchester United left-back was a guest pundit on Monday Night Football alongside Jamie Carragher as both reflected on the game after full-time.

Evra didn’t hold back and was very clear with his criticism of the Gunners.

He made the point that he doesn’t think there is enough quality and seediness in the current Arsenal side, and that nothing has changed since the days he faced them as a United player.

Watch the footage below via Sky Sports Premier League:

“I used to call them my babies and they still look like babies”@Evra is not impressed with Arsenal after they lose at Sheffield United pic.twitter.com/cp8qhsw15P