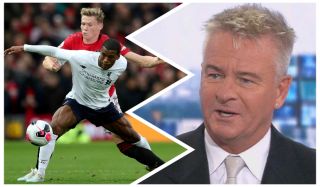 Fred and Scott McTominay have been heavily criticised by Sky Sports pundit Charlie Nicholas for their performance in the 1-1 draw with Liverpool last weekend.

The Red Devils put in an improved display against the Premier League leaders and many, including myself, feel we deserved more than a point from the game.

However, we have high standards at Old Trafford and the midfield duo don’t compare with United midfielders of old.

That sounds like a harsh criticism for McTominay, who has broke into the team properly this season, but Fred have failed to impress since arriving in 2018.

Speaking after the game on Sky Sports, Nicholas slammed the pair because they’re allegedly mot able to complete a simple task such as passing the ball.

That’s a harsh assessment of McTominay, especially, and Fred wasn’t as bad against Liverpool as he has been in other games.

Still, the Brazilian has his work cut out if he’s to become a star at United.

Discussing tactics, Nicholas has been quoted by the Metro: “Ole Gunnar Solskjaer will want to go to a back four, but their midfield cannot keep the ball.

“Scott McTominay and Fred are grafting but they cannot pass the ball.”

It’s no wonder that United’s midfield is coming in for criticism this season. Compared to a year ago — we questions were also raised — it’s worse and lacks even more depth. Ander Herrera was never replaced and neither was Marouane Fellaini.

Next up for United is Partizan Belgrade in the Europa League. It remains to be seen if Paul Pogba will return for that one, though, I wouldn’t hold my breathe.