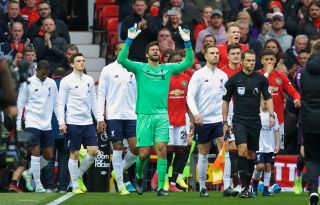 Manchester United’s 1-1 draw with Liverpool at the weekend almost encapsulated where the club is at in the current moment. It was a game of two halves and the Red Devils season so far, on and off the pitch, has been as equally contradictory.

The first 45 minutes at Old Trafford belonged to Solskjaers men. United had all the fight and desire of teams of old that contained the likes of Keane, Neville and Butt, whilst looking lightning fast and threatening on the break, reminiscent of Giggs, Ronaldo and Rooney.

There was a game plan to match. The five at the back were stifling Liverpool’s famous wingers and full-backs from causing any sort of threat. That placed emphasis on the Merseyside club’s central midfielders to be more creative, a trait they are not renowned for, and it showed.

United got their just deserts after Victor Lindelof was adjudged to have nicked the ball ahead of Origi fairly following a VAR review, before Scott McTominay released the electric Daniel James. The Welsh winger whipped in a delightful ball for Marcus Rashford who supplied the finish after losing his marker with some excellent movement. United went into the half-time break extremely satisfied, but you are never in control of a game with only a one goal lead, especially against the European champions.

If the first half characterised all the good work that has gone on at Old Trafford since Ole’s appointment, the second 45 minutes depictured all the work that is left to be done.

Instead of capitalising on Liverpool’s disappointing display and their apparent control of the fixture, United retreated after the break and looked to hold on to what they had got. Top teams do not do that, especially at home. You very, very rarely witness a Pep Guardiola or Jurgen Klopp side settle for one, two, three or even four goals. They keep going for the jugular for the entire 90 minutes and try and finish teams off until they have no more fight left in them.

Yes, United may be some way off the quality of those City and Liverpool sides but the same standards and principles should apply. Liverpool have struggled at Old Trafford in recent years and continued to do so on Sunday, United had a perfect opportunity to punish them for their below par display and failed to do so. Ashley Young and Marcos Rojo switched off at the back post late on after continuous Liverpool pressure, allowing Adam Lallana a simple tap-in, leaving De Gea no chance. For a few nerve jangling minutes at the death it seemed that Jurgen Klopp’s men would find a winner, most notably when Alex Oxlade-Chamberlain fired just past the post with a stinging drive. Although the loss would have been undeserved, United could have had no complaints as it was their lack of ambition that allowed Liverpool back into the match.

Much has been made about whether Solskjaer is the right man to restore Manchester United to former glories. The Norwegian has implemented some great changes from renewing the contracts of established key players such as David de Gea and Victor Lindelof, to giving youth a chance in the likes of Mason Greenwood, Angel Gomes and Brandon Williams.

Solskjaer’s three summer signings have all done well in the early stages of the campaign too, especially James who grabbed a crucial assist at the weekend. The former Cardiff manager has also overseen a clear-out of the current squad that has witnessed a lot of deadwood depart Old Trafford. However, not everything has been rosy since Ole succeeded José Mourinho last December. Much like the derby on Sunday, Solskjaers reign started very well and has contained a lot of good work since, but it has tailed off in the later stages and revealed how far is left to go.

Fans have been disappointed with the style of play the United legend has implemented. Supporters have rarely been raised from their seats with exciting play or an abundance of goals. Solskjaer also seems tactically naive at times, failing to break down lesser opponents regularly. The opening period against last seasons runners up appeared to put that theory to bed as Ole and his backroom staff seemed to have found Liverpool’s weakness. But Ole’s apparent naivety rose its head again as United sat back and allowed their fiercest rivals a passage back into the game.

United are now languishing in 14th position in the Premier League table. A defeat away at Norwich next week could realistically see the 20 time league winners in the relegation zone. At times United seem so close to returning to the top, at they did in the first half a few days ago.

The right people have left the club, the transfer policy has changed for the better and the youth are being given a chance. Nevertheless, there are more times where the club still feels so far away from recapturing the glory days under Sir Alex Ferguson. The owners, Ed Woodward, the tactical unintelligence, and the widely accepted view that the current side needs for five or six top signings, reminds United fans that is it is still a long road to recovery.