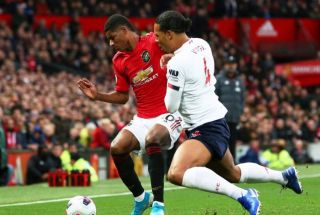 Marcus Rashford scored Manchester United’s only goal against Liverpool at the weekend.

The England international has come in for criticism this season due to United’s lack of goals, prompting questions of manager Ole Gunnar Solskjaer for selling Romelu Lukaku in the summer without signing a goalscorer to replace the goals he brought to the team.

But Rashford lead the line brilliantly on Sunday, alongside Daniel James, and his movement for the goal was exceptional.

TalkSPORT host Adrian Durham claims Rashford had Virgil van Dijk in his back pocket over the weekend.

“They went through his (Rashford) pockets afterwards,” Durham said on talkSPORT. “Few sweets, wad of cash, couple of phone numbers… Virgil van Dijk was in there as well, extraordinary.

“Left him on his backside and got the better of him, worried him.

“He worked so hard, you could see he was run into the ground when he was taken off.

“He was taken off when they were 1-0 up and what you do know, they didn’t go onto win it.

“I thought he was really good and answered a lot of critics but he needs to be more consistent.”

The comments made on Monday are accurate, Van Dijk didn’t have one of his better days but that was down to more factors than Rashford.

Liverpool were not expecting James to partner Rashford up front — hence for the opening goal Van Dijk and Joel Matip didn’t know how to deal with United’s quick counter-attack.

They can complain about the goal because of the alleged foul by Victor Lindelof on Divock Origi, but that happened in the other half of the pitch. Their defending afterwards aided United’s attempt to take advantage in the game.

It’s frustrating that we weren’t able to hold onto the lead but beforehand we would have took a point against the league leaders.