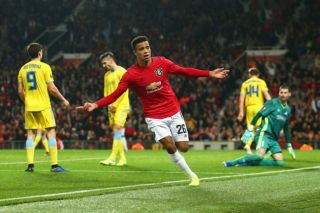 Manchester United travel to Belgrade this week where they face Partizan Belgrade on Thursday night for a fixture that could have a bearing on who tops Group L in the Europa League.

Our upcoming opponents currently sit top on four points and could pull further away from the Red Devils, currently in second-place, with a win.

United’s away form has been abysmal of late — not winning on the road since March — and even though we are superior than Partizan on paper, we cannot underestimate the Serbian outfit.

Ole Gunnar Solskjaer’s side have yet to concede in the Europa League this season, however, the Red Devils have scored just once across their two games thus far.

It will be interesting to see if Solskjaer will use the same system (3-5-2) — or something similar — to what we saw against Liverpool at the weekend when Daniel James partnered Marcus Rashford up front.

Partizan Belgrade’s biggest threat is arguably Umar Sadiq, who will hope he can put an end to United’s clean sheets in the tournament. The Nigeria U23 international is their top goalscorer this season (8 goals in 17 appearances) and has two goals in their opening two Europa League fixtures.

Paul Pogba remained sidelined with injury, while Luke Shaw and Nemanja Matic have both been sent to Dubai to speed up their recovery. Jesse Lingard could make a return after missing the 1-1 draw against Liverpool on Sunday.

Mason Greenwood is likely to start and Solskjaer may also want to give Anthony Martial minutes to ensure he reaches full match fitness as soon as possible.

This very much depends on the team Solskjaer fields with one eye on the weekend’s game versus Norwich. United really need to improve on their league form because they’re currently closer to the relegation zone than the top four. The Europa League gives fringe players an opportunity to shine and I expect Solskjaer to give some of the youngsters a run. Fancy United to come away with a narrow win.