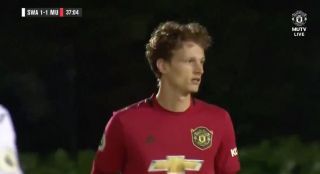 Taylor, who signed his first professional contract at the club last year, replaced an injured Teden Mengi during the first half of United’s 4-1 win over Swansea City.

Coming on at centre-back, Taylor didn’t see any goals conceded whilst on the pitch but the scoreline was 1-1 when he came on, as seen in the video below (footage from MUTV):

This is the best video you’ll watch today. Man United U23s defender Max Taylor returned to the pitch last night after successfully recovering from cancer. So happy for him.

It’s truly heartwarming to see him back on the pitch again and shows that the youngster has a remarkable mentality.

We send our best wishes to Mengi and hope his injury isn’t too serious.

But also a massive congratulations to Taylor.