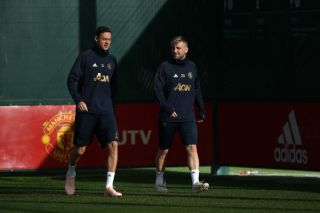 Manchester United are sending Luke Shaw and Nemanja Matic to Dubai as they look to speed up their recovery from recent injuries, according to Sky Sports.

It sounds like the duo’s path to recovery will take a similar route taken by Paul Pogba recently, with the France international flying to Dubai for much of the recent international break to work on his fitness.

Pogba was pictured with Real Madrid boss Zinedine Zidane during his time away and that prompted more speculation over the midfielder’s future.

Shaw has only made three appearances this season — last playing on August 24 as United were beaten by Crystal Palace.

On the other hand, Matic has missed the last two games but it doesn’t feel like he’s seen as a starter under manager Ole Gunnar Solskjaer, who has preferred Scott McTominay since the beginning of the season.

Next up for the Red Devils is a trip to Partizan Belgrade in the Europa League on Thursday night. Then it’s Norwich away on Sunday.

It doesn’t sound like Shaw or Matic will be fit for those games, so Solskjaer will be hopping the rest of his squad steer clear of any additional knocks or injuries.

This could give youngster Brandon Williams a chance to shine in the first team, with the left-back in contention to get minutes in the Europa League. Ashley Young will probably edge his way in next weekend against Norwich.