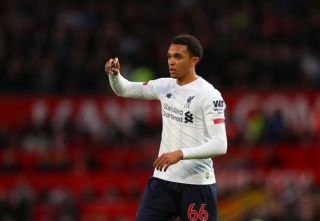 Credit to Manchester United for working fast and appropriately to identify and ban the supporter who hurled racist abuse at Liverpool’s Trent Alexander-Arnold.

The fan in question was kicked out of Old Trafford on Sunday during the 1-1 draw with Liverpool.

It’s a shame that some idiot has to tarnish a game of football — and it’s becoming all too common in football, with racist chanting and facist gestures made at a recent England game in Sofia, Bulgaria.

As per the Daily Mail, United scoured CCTV to trace the fan involved and the person in question has been banned for life. It is alleged that whoever is responsible shouted ‘you f***ing black ****” at the Liverpool defender.

Fellow United fans are said to have reported the behaviour of this abhorrent person, which is good to hear because such bigotry is not welcome at Old Trafford.

The club contacted the Greater Manchester Police as part of their investigation.

We’re proud to hear United have taken such a strong stance against this kind of behaviour — rather than brushing it under the carpet — because we all need to get together to stamp racism out of football.

Racism is a serious problem in the game. Well done to United for taking the necessary steps to tackle it and to those who reported the idiot.