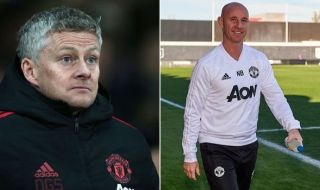 Nicky Butt has given an interview explaining the role Ole Gunnar Solskjaer has played thus far with blooding Manchester United youngsters for the future.

The former midfielder, who was Solskjaer’s teammate at Old Trafford, knows all too well the path taken by the Norwegian before becoming first team manager.

His background as Academy coach before taking over at Molde means he’s experienced when dealing with young players at United, and should know what needs to be demanded of them in order to succeed.

Solskjaer has not been afraid to play the youngsters with Mason Greenwood, Tahith Chong, Mason Greenwood and Brandon Williams all getting minutes in the first team this season.

Butt, who is head of development at Manchester United, says we’re fortunate at the minute to have Solskjaer in the hot seat.

Check out the quotes below, provided by chief football writer at Press Association Simon Peach (@SimonPeach):

Butt on Solskjaer: “We’re fortunate at the minute that Ole is in hotseat. He’s coached in the academy, he did his coaching badges with academy players & coaches, so he knows pretty much everybody right down to the Under-12s in the club & that can only be beneficial” #MUFC

This is a clear call for patience not only for the youngsters in question, but Solskjaer who has come under fire after a challenging start to the season.

It’s worth asking how many minutes these Academy graduates would have played this season, though, had United been better stocked in several departments across the pitch.

In defence it’s been better than previous years thanks to the arrivals of Harry Maguire and Aaron Wan-Bissaka, but Williams could soon push Luke Shaw for the left-back position.

We’re light in midfield and up front which may explain why most of the youngsters getting chances in the team are more attack-minded.

Solskjaer won’t fix United overnight — we knew that when he was made permanent manager back in March — and the youth he’s putting faith in will take time to mature.

The Red Devils face Partizan Belgrade in the Europa League on Thursday night and Solskjaer is expected to field more youthful prospects.

Hopefully the future is bright.