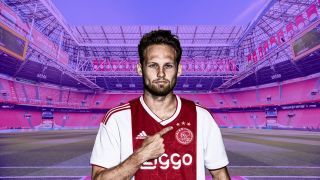 Ajax’s Daley Blind has been talking about Manchester United this season.

And, as a former player, he hasn’t enjoyed seeing the club he once represented struggle so bad.

The Netherlands international, who spent four-years at Old Trafford before returning to the club Louis van Gaal bought him from, was sold as he didn’t fit into José Mourinho’s plans at the time.

Watching him last season as Ajax reached the Champions League semi-finals, it is fair to question Mourinho’s decision to get rid of Blind instead of other defenders that remained at the club — such as Phil Jones and Chris Smalling.

Anyhow, United’s standards have dropped again since he left and are currently 14th in the Premier League, closer to the relegation than they are to the top four.

Ahead of their Champions League clash against Chelsea this week, the Ajax star said he was impressed with Frank Lampard’s side, though it was ‘not nice to see’ United’s situation.

“Of course I’m not happy to see Man Utd and how they’re performing at the moment,” Blind said, as per the Daily Mail.

“I’m still a fan of United and it’s not nice to see.

“Regarding Chelsea, they are doing well, they have a good philosophy under a manager who wants to play out from the back.

“They play different attacking football with a lot of youngsters and that’s nice to see.

“From that perspective, it’s good. But if you’re talking about United then I’m not happy about that, of course.”

When you look at our problems at left-back — with Luke Shaw out and Ashley Young still starting games — it’s difficult to refrain from thinking it was a mistake to get rid of Blind.

A technically gifted player who can also play in midfield, it’s a wonder if Ole Gunnar Solskjaer would have kept hold of the Dutchman.

Best of luck to Blind and Ajax who face Chelsea on Wednesday night in Amsterdam.