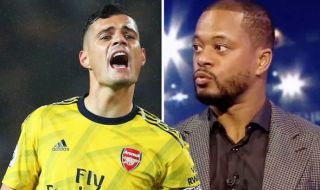 Patrice Evra was a guest pundit on Monday Night Football and the former Manchester United left-back was critical of Arsenal’s mentality after suffering a 1-0 defeat against Sheffield United.

Arsenal midfielder Granit Xhaka hit back at critics, including Evra, insisting their belief that Arsenal have a weak mentality away from home is wide off the mark.

Last night’s loss meant Unai Emery’s side missed out on a chance of climbing to third in the Premier League.

The truth is criticism of Arsenal’s away form isn’t wide off the mark at all. The loss at Bramall Lane was a fifth in the last 10 away games, and from watching last night you could throw more criticism Emery’s way because he’s been in charge over a year now.

Arsenal were dealt more criticism last night, with Evra describing their players as a bunch of “babies”.

The Swiss international has since responded, saying, “We have to stop about mental [strength] bulls*** like this. For me, it is the same whether you play home or away – you have to win and show big character and a good game and not to always find the same excuse.”

Addressing Evra’s comments, he added, as per Sky Sports: “A lot of people they speak too much. It is not the first time he has spoken something about us.

“I have a lot of respect for him as he was a great player but you have to be careful what you say. But it is not only him – a lot of people speak a lot of bulls*** about us. It’s always the same.

“I tell you the honest truth, I’m not interested in what people say and speak. We have to speak in our group to improve things and work hard and not listen to these people.”

Evra was asked on to Monday Night Football to cover Arsenal vs Sheffield United, not to sit in the studio like a mute.

So, Xhaka clearly struggles to take criticism, and on a night you lose to lesser opposition he should take responsibility rather than cry about it.

Of course people are going to talk when a club like Arsenal, who used to win league titles, lose to a newly promoted side.

Easily know Xhaka wasn’t part of those great sides. He wouldn’t be deemed fit enough to clean any of their boots, the big walking yellow card.