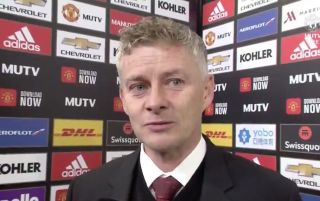 Ole Gunnar Solskjaer has explained his thinking behind the tactical switch that took place on Sunday as Manchester United drew 1-1 with arch rivals Liverpool.

United switched to a back three at Old Trafford, and Solskjaer side arguably deserved to win the game.

Before the Newcastle game Solskjaer hinted that he could change tactics in order to improve his team’s results — and United got an unexpected point against the Premier League leaders.

Perhaps controversially, Solskjaer praises the work of referee Martin Atkinson after Liverpool argued United’s first goal should have not stood. Divock Origi appeared to be fouled by Victor Lindelof in the buildup of Marcus Rashford’s opener.

Watch the video below as Solskjaer explains why he felt it worked well in nullifying an in-form Liverpool side:

Ole reacts to today’s result and explains his thinking behind a slight change in formation for #MUFC 🧠#MUNLIV pic.twitter.com/mM93OoLaYA

The question now is will United stick with these tactics in the coming weeks.

The centre-backs at the club will be delighted because it means more game time. Phil Jones though, I’m not sure if we’ll ever see him again.