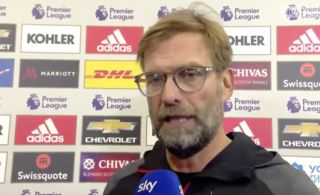 Jurgen Klopp says Manchester United have been a defensive side ever since he came to England in 2015.

The Liverpool manager was talking after Sunday’s 1-1 draw at Old Trafford, which saw Adam Lallana score a late equaliser after Marcus Rashford gave us a first-half lead.

United were the better team throughout the game — until the last 10 minutes during which Lallana equalised and the Red Devils hung on for dear life, though that wasn’t the case for the most part.

Ole Gunnar Solskjaer’s side plays best on the counter-attack which is how Rashford’s goal came before the interval. There was controversy over the goal with Liverpool forward Divock Origi fouled in the buildup.

Klopp was not impressed by the tactics on display at Old Trafford — and Roy Keane had the perfect reply.

And Jose’s response: ‘Because he never beat Manchester United at Old Trafford. I think he didn’t like the menu. He likes meat and he got fish…’

“This game everybody builds it up like a mountain,” Klopp told Sky Sports.

“Ever since I’ve been in England it’s been the same. One team has only to defend and the other teams has to make the game.

“We take the point, it’s better than no point, but it’s not that big a deal that we won something.”

United deserved the win yesterday but these bitter comments from Klopp have helped improve my mood this morning. It’s even funnier than it sounds like he was watching a different game.

The German has come to Old Trafford a number of times and still can’t get a win, no matter what he does. Solskjaer fielded the worst United side I’ve seen take on Liverpool and David de Gea had nothing to do, other than take the ball out of the net after Lallana scored.

I guess we’re getting to the bottom of it… why Klopp is so bitter.