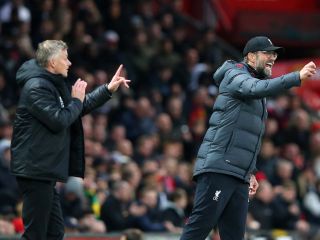 Ole Gunnar Solskjaer gave a strong message in the dressing room after Manchester United’s 1-1 draw with Liverpool on Sunday.

Addressing the players in the dressing room after the match, the mood was seemingly positive despite Adam Lallana’s late equaliser for Liverpool, with United still feeling they deserved all three points from the game.

According to the Metro, Solskjaer told his players to use this performance as a blueprint for the rest of the season, with the team improved on the basis of results and displays prior to the international break.

Solskjaer allegedly shook every player’s hand and thanked them for their contribution.

It is clear from this that Solskjaer is trying to build his own siege mentality at the club, and we’re certainly not ones to knock it. He needs them busting a gut for him on a consistent basis, though, not just when Liverpool come to town.

It only seems like a result of some sort because of the many recent disappointments, all while Liverpool sit on top of the Premier League table.