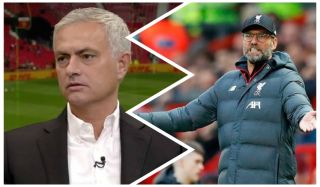 José Mourinho doesn’t need an invite to throw a dig.

And, surely if that’s the case, other teams will take note and test it in the coming weeks.

That could see Liverpool trip in their hunt for Premier League success — which we’re totally in favour of!

United defended well but only really hung on for dear life in the last 10 minutes.

“Their quality as a team to play against a low block, which is a problem that sometimes they have,” Mourinho said on Sky Sports, as quoted by the Metro.

“They have these fantastic records of all these victories, but they have some limitations against teams with low blocks.

“Jurgen clearly has a little bit of frustration, they are a fantastic team, but at Old Trafford, a special place for Liverpool to win, he never did it.”

At Old Trafford, Liverpool have played poorly in recent years.

Mourinho is also rubbing the salts into Klopp’s wounds by reminding the German coach that he never beat him at Old Trafford.

Marcus Rashford’s goal came from a brilliant counter-attack, though there were calls from Liverpool for a foul on Divock Origi in the build up.

Second-half substitute Adam Lallana scored the equaliser late on for Liverpool and the game ended 1-1.