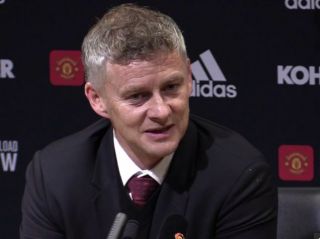 Ole Gunnar Solskjaer gave a brief update on Manchester United’s injury players after his side drew 1-1 with Liverpool on Sunday.

The United manager told reporters in his post-match press conference that he hoped to have a number of first team players back to full fitness in the coming weeks.

While David de Gea was surprisingly passed fit to face Liverpool, Aaron Wan-Bissaka returned from illness and Anthony Martial made a long-awaited appearance from the bench.

Solskjaer has a fresh concern with Axel Tuanzebe pulling out of the line-up on Sunday after sustaining an injury in the warm up.

Next up for the Red Devils is Partizan Belgrade on Thursday.

“I don’t know how Axel is but hopefully Jesse [Lingard] is back soon,” said Ole, as quoted by ManUtd.com.

“Anthony [Martial] will be able to play more.”

Paul Pogba was ruled out again after failing to recover from an ankle injury, but he was seen on crutches at Old Trafford. Solskjaer didn’t get much away but it doesn’t look like he will be back for anytime soon.

Instead, Ole briefed that he is expecting an update on Pogba soon.

“We’re going to have a test on Pogba tomorrow and see where he’s at and how long it’ll be until he’s back,” Solskjaer added.

It shouldn’t be long before we see Luke Shaw back in the team. Ashley Young started at left wing-back but youngster Brandon Williams made an appearance in the second half.

“Luke is not too long [away]. So, it’s looking brighter and that’s a big plus as well.”