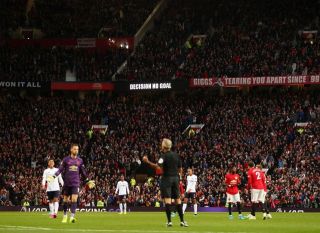 Manchester United ejected a fan from the home end at Old Trafford during Sunday’s clash with Liverpool over alleged racial abuse.

The club says they are investigating the matter as a priority and the police have are understood to have been informed.

A spokesman is quoted by Sky Sports, saying, “We are aware of an incident at yesterday’s game where an individual in the home section has allegedly engaged in racial abuse.

“The individual was identified and ejected from the stadium. We are currently investigating the matter as a priority.

“Racism and all forms of discrimination are completely unacceptable and do not reflect the values of our club.”

Whoever is responsible, if found guilty, should be hit with an indefinite ban.

The fixture itself found itself in the middle of a race row between two players in 2011.

Eight years on and that entire row still occurs on social media. Some still not in agreement that Suarez deserved the eight-match ban he received as a result.

But away from that a moment. Something needs be done about the racism in society as well as football, and further punishment needs to follow until it’s fully stamped out.

Partizan Belgrade manager Savo Milosevic has asked supporters not to put shame on the club when United visit this week. Their fans haven’t got the best reputation when it comes to behaving like bigots.

It needs to stop!