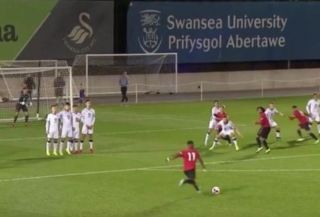 Manchester United youngster Largie Ramazani sent a message to Ole Gunnar Solskjaer with a stunning free-kick for the U23s against Swansea.

Stepping up to take a free-kick, Ramazani hammered the ball home into the bottom left hand corner to get the Reds back on level terms.

United U23s came from behind the beat Swansea 4-1. An own goal from Swans keeper followed by Aliou Traore’s superb solo effort put the seal on another victory for Neil Wood’s team — making it three wins from the last four games.

Solskjaer has shown he’s more than willing to give youngsters a chance in the first team.

Watch the goal below (pictures from MUTV):

Largie Ramazani levels it up for #MUAcademy U23s with a pinpoint free-kick! 🎯