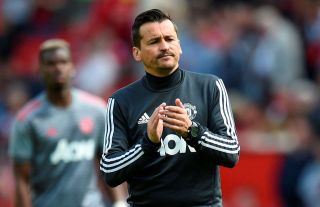 Following Manchester United’s draw against Liverpool on Sunday Axel Tuanzebe become the 12th player this season to pick up an injury after pulling his groin during the warm up. You could be forgiven for thinking that only happened to veterans over-lunging before a testimonial match but when it happens at United there’s not much surprise.

So why are the team picking up so many muscle injuries?

A 35-year-old Zlatan Ibrahimovic was able to play 46 games in the 2016/17 season without picking up any muscle injuries. Similarly, Romelu Lukaku played 51 games the following season without picking up a muscular injury. Jose Mourinho’s right-hand man at the time was the loyal and ever-present Rui Faria. Where Mourinho played the bad/miserable cop, Faria was the good cop. He was the Dr Jekyll to Mr Hyde. The Watson to Sherlock Holmes. The Phelan to Ferguson. But he was much more than the nice guy, the calming influence and the more approachable go-to man; he was a meticulous analyst and fitness expert. It’s probably fair to say he was more of a Carlos Quieroz than a Mike Phelan, with the former instrumental in helping United win the Champions League in 2008.

Faria was well liked amongst the United squad with many players – such as Luke Shaw – preferring to confide in him rather than Mourinho. He also seemed to be the point of contact for the players out on loan, with both Andreas Periera and Tuanzebe speaking of check-ins with Faria while on loan with Valencia and Aston Villa, respectively. It was also well documented that Faria lead most training sessions at Carrington, with Mourinho spending more time in his office than on the field. But it was probably Faria’s sports science methodologies and philosophies that were his biggest asset.

Mourinho’s former assistant is a follower of Victor Frade’s tactical periodisation methodology, believing players shouldn’t run themselves into the ground or over-exert when training. Early evidence of Faria’s impact can be seen following his departure from Inter Milan after their treble-winning season. Within just a few months of Rafa Benitez’s short-lived spell in charge, Inter had a huge injury list with key players missing, mainly with muscle injuries. Mourinho famously said (of Benitez) “he destroyed the best team in Europe…”. Faria himself also hinted that Benitez’s methods were behind the injury crisis.

Following Faria’s departure from United, Stefano Rapetti was brought in as head of fitness but lasted only 6 months after being shown the door with Mourinho. During Rapetti’s time at the club United had suffered muscle injuries to Rojo, Smalling, Darmian, Martial, Lindelof, Sanchez and Shaw. By Ole’s own admission in the latter half of last season, the players weren’t fit enough to compete, and his damning admission was backed up by stats that showed only Cardiff and Brighton had covered less distance on the pitch than United. Clearly a problem Ole was keen to address, with Charlie Owen promoted to the fist team setup as fitness coach. Scott McTominay was quoted in July saying he’d “never had a week like that” following Owen’s appointment, with Shaw also making similar comments. But the intense fitness regime has come at a price, with United already this season seeing a long list of players picking up injuries – again muscle – with Pogba, Shaw, Lingard, Martial all spending time on the treatment table.

Before the Arsenal game at the end of September Ole spoke of having “bad luck” with injuries. Some might agree while others would say it’s down to poor coaching. Maybe it wasn’t just coincidence that United’s treatment room became a lot busier after the departure of Faria.