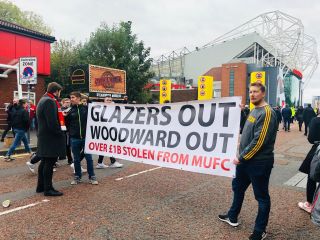 So I am a season ticket holder in the East Stand and have woken up today and something is missing. Normally a home game against Liverpool would get the heart pumping and there would be that pre-match buzz. But today I have a predominant feeling of dread, tinged with just a tiny bit of optimism that keeps me going to support the lads.

If we could pull it off, it would be sweet to end their winning run and could be a turning point for this team. Looking at it objectively however there doesn’t seem too much to get positive about. This game could be won and lost depending on injuries, if Salah doesn’t make it that will be a massive boost for us. If Martial is fit, with the current lack of goals you have got to think he will feature from the start.

So I will be heading into the city shortly. I am going to make sure that the day is not a total right-off, so I am going for a couple of pre-game scoops at the best pub in Manchester, The Marble Arch. It is a bit of a hike down Rochdale Road but the beer is sensational, so I won’t come up completely empty handed if the result does not go our way.

So it is a bit of climb for me to get to concourse, OT these days is starting to show its age now and the ascent up the stairs never gets easier. I went to the NFL last week at Tottenham’s new stadium, I knew it would piss me off and it did. That stadium is ridiculously ahead of us now and it was just another kick in the nuts reminding me how far we are starting to slip behind. Still, this is Old Trafford, that means a lot and the heart is starting to rule the head as kick-off gets closer. Of course we are going to win!

I like to get to the ground early so I can have a moan with fellow sufferers and pick apart the bones of the 2019/20 season. The beer has taken a turn for the worse. It has gone from the best in Manchester to, well, Heineken (early fans ‘enjoy’ half price drinks though!). Anyway the team will be announced shortly and talk about the game focuses on the rumour that Salah has not been seen coming off the bus. That would be a big lift for us if true. 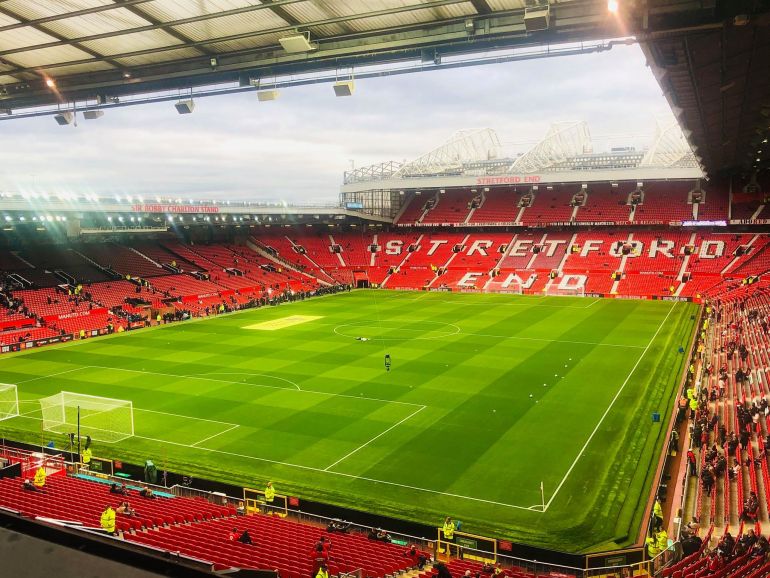 The team announcement gets a mixed reaction. Martial just makes it to the bench but the good news is De Gea has plays and indeed the rumours are true, Salah is not in the squad. The atmosphere on the concourse is picking up, people are starting to believe!

Kick-off is met with a top effort from the Red Army section, fans are jumping and there is a roar of defiance across the ground. Sounds like everyone has forgotten the abysmal Toon performance and we look up for this. Certainly the fans do!

An early break through. A sweeping cross from James is bundled in by Rashford and we are on it. I am jumping up and down when the guy next to in mid-celebration accidentally pushes me into the back of the chair in front of me. It is a bizarre feeling, my shin is in agony but it doesn’t matter, we are one up against the Scouse. Surely we must kick on from here. Even VAR can’t spoil the party and indeed, in another cracking moment for VAR Liverpool celebrations are cut abruptly short. Not so many “6” balloons in the air now!

Second half and fans carry the momentum from the rousing effort in tbe first forty-five, the atmosphere is still bouncing and we have hardly heard a peep from the away end. The game is starting to shift in their favour, we are starting to play a lot deeper and some anxiety is creeping in. We may need to hang on here. Five minutes out and some shocking defending gifts Neverpool an equaliser. We stood off them and fail to track Lallana’s run and he has a tap in at the far post. Gutter. To almost add salt to the wound, we survive a last minute VAR penalty decision and the game is over.

It feels really strange after the pessimism from this morning, to be leaving OT disappointed at not winning seems a bit greedy, but we were leading that game for so long it definitely feels like two points dropped. As we head to the stairs we can hear the Scousers celebrating, pretty sad. They manage a weak effort of “going down” and with that we are heading out. We may not have won but we have brought their 100% win record in the league to an end, and we will take that.

Heading towards the tram and the mood is a little bit subdued but fans are happy with the overall performance. There was more appetite and ambition, with the exception of their goal there seemed to be a bit more effort across the team. I can’t help feel though that replacing Rashford with Martial was a strange move. With the game balanced on a knife edge, Tony was coming in, not match fit and Rashford had already scored for us coming after a stunning goal for England. You would think he was better placed to get us a second.

There is no singing on the tram. Whilst it was it was definitely a better performance it is clear we are lacking in several positions. Still, we did not get humbled and we move on with surely a couple of winnable games coming up against Norwich and Bournemouth but with a tricky trip first to Belgrade. Bizarrely it is four away games on the bounce now, so nearly three weeks before we return to Old Trafford. Is this the start of the fight back?