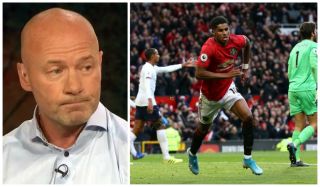 Alan Shearer hints that Marcus Rashford is back to his very best after the striker played a key role against Liverpool.

Rashford scored United’s opening goal as they earned a point against their arch rivals on Sunday.

The Manchester United forward was a nuisance all afternoon with his clever movement, which also played a big part in his goal, with Joel Matip unsure where his man had gone before striking home.

He left the Cameroonian defender wrong-footed to give himself space to finish from Daniel James’ excellent cross.

Shearer wrote in his column for The Sun: “Rashford’s movement for the goal was superb which gave him the room for James to find him with a brilliant cross. It was exactly what a proper centre-forward should be doing.

“I saw him play against West Ham and Newcastle recently and there was a complete lack of movement in his game.

“But on Sunday he was full of running and energy, giving Liverpool’s back four problems all match.”

Rashford has had his share of criticism this season, and he ended a barren run of just the goal from open play in his previous 22 appearances for club and country when he found the back of the net in England’s 6-0 thrashing of Bulgaria last week.

The goal against Liverpool should give Rashford a much needed boost with Anthony Martial coming back into the team.

Shearer added: “Rashford is playing in a very average team right now where he has to feed off scraps, so he deserved his standing ovation at the end when he was replaced by Anthony Martial.

“It’s unfair to have all that pressure on Rashford, but Martial’s return from injury could now ease the burden on him for goals.”

Ole Gunnar Solskjaer was also pleased with Rashford’s movement for the goal, saying, “he has had a few games with his back to goal where we haven’t given him the ball and I think that was his best game for me.”