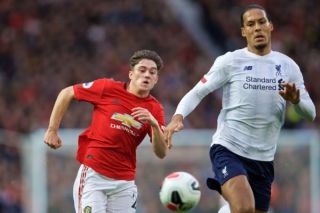 Manchester United performed better against Liverpool on Sunday than many imagined. We haven’t had a good start to the season and were about to face a Liverpool side with a perfect start after eight games.

It feels like two points dropped which is amazing because going into the last international break most of us would have been happy with a point.

The Reds deserved the win.

The players remain behind Ole

For all the briefing from United sources of support for Ole Gunnar Solskjaer’s long-term vision during the two week international break, the support of United’s players is ultimately what the manager will rely on in the weeks and months ahead. On this evidence at least, the players remain fully behind him. Despite the surprise inclusion of an initially doubtful David de Gea, when team news circulated, few could argue Liverpool’s man-for-man superiority on paper at least.

However, unlike in recent defeats, United actually put in the type of shift to demonstrate support for the manager and his methods. Yes, it’s Liverpool at home and you shouldn’t need telling how big a game it is – but with the lack of quality on show in recent displays, application and work rate were the least Old Trafford could expect. It just makes you wonder why they’ve been lacking in recent times and, more pertinently, whether they can be replicated more consistently.

Ole hinted at a potential system change in the wake of the Newcastle defeat, so this was not completely unexpected. Though, the effectiveness of said change might have surprised some. Despite the late disruption caused by Axel Tuanzebe’s injury in the warm up, United didn’t suffer too much in terms of execution; nullifying Liverpool’s raiding full backs for much of the game. The returning Aaron Wan-Bissaka was, again, excellent in providing defensive cover, as well as an outlet going forward – albeit he could probably still work on his end product in crossing positions.

The consequence of which was funnelling many of Liverpool’s attacks through the middle of the pitch, where Andreas Pereira, Fred and Scott McTominay hussled and harried to good effect, particularly in the first half, forcing a number of misplaced passes. The formation change also provided Marcus Rashford with an attacking foil in the form of Daniel James, whose pace and trickery provided a constant threat throughout. United’s pressing and front-foot approach, particularly in the first half, ensured that this was actually a back 3 with two wing-backs in practice; as opposed to a flat back 5. With Paul Pogba, Anthony Martial and Luke Shaw to return from injury, might this be something we see more of?

One the main criticisms of Ole Gunnar Solskjaer during his reign has been his in-game management, and that was an issue once again. Despite sporadic second half counter-attacks, United continued to drop deeper as the minutes ticked on. With the continued inability to score more than 1 goal in a game since the 4-0 victory over Chelsea on opening day, it was always going to be a risky strategy to try and sit on a 1-0 lead for nearly an hour – and so it proved. As the game wore on, United dropped into a back 5 and certainly could have done better in cutting out the Andy Robertson cross which led to Adam Lallana’s last equaliser.

United’s first substitution came shortly before the Liverpool equaliser, with Martial replacing Rashford. Martial clearly only had a few minutes in his legs, and his introduction only led to United dropping off further – as Rashford, along with Dan James, had been the main outlet in allowing the team to move up the pitch. Despite his work rate, Andreas Pereira was quite wasteful in possession – particularly in the first half, and one wonders what difference a proper number 10 would make to United when it comes to decision-making and end product in the final third. United didn’t have had an array of attacking/midfield options on the bench, but the introduction of a passing midfielder like James Garner may have helped close the game out late on. Most United fans would have taken a point pre-match, but it’s one tinged with disappointment at failing to hold on having been in the lead for so long.

The young Welshman was tireless, and provided the game’s moment of real quality with his cross leading to Marcus Rashford’s opener. He was intricate in tight spaces and seemed to be targeted for some rough treatment in the second half, by Fabinho and Virgil Van Dijk in particular. Having been predominantly played off the left this season, he showed versatility where he may have otherwise struggled. His pressing was energetic, and he seemed to have instantly understood what it means to play in a United-Liverpool game. Whilst many assumed that he would play a peripheral role in his first season at the club, James’ rapid rise continues since his move from Swansea.  He’s started nearly every game this season, so let’s just hope that doesn’t lead to burnout later in the season – particularly with United’s tendency to pick up muscle injuries.

Massive period of away games upcoming

United haven’t won an away game since that night in Paris in March, so the next 4 games in all competitions are vital in ending that run. Thursday brings a tricky trip to Belgrade in the Europa League, before the short turnaround and trip to Norwich. For all the positives from the point against Liverpool, they will become a distant memory should United fail to win at Carrow Road next Sunday. Norwich have been leaky at the back thus far this season, but have posed problems for both City and Chelsea at home, so three points is by no means a given. The same also applies to the following weekend’s trip to Bournemouth, as well as the Carabao Cup tie at Chelsea in the intervening week. The Liverpool performance has provided a benchmark which Ole can point to, in terms of work rate across the pitch, moving forward. With injured players to hopefully return to full fitness, one can only hope this performance provides confidence to the team moving forward – and a platform to build from in the run-up to Christmas and the January transfer window.