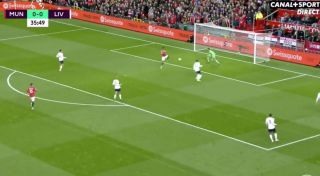 Marcus Rashford has opened the scoring at Old Trafford as Manchester United take the lead against Liverpool.

The Liverpool players are unhappy with Martin Atkinson’s decision to allow play continue after Victor Lindelof appeared to have fouled Origi.

Jurgen Klopp will be sure to bring it up at full-time if Liverpool don’t get back into this game.

United broke after the alleged foul on Origi before Daniel James sent a brilliant cross into the box for Marcus Rashford to convert.

The call had a VAR check and the goal still stood.

Watch the goal below (footage from Canal+ Sport):