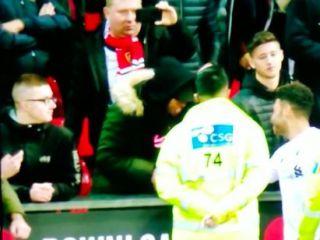 Alex Oxlade-Chamberlain has a chip on his shoulder for some reason.

You’d think a player who has spent the most part of the last year out injured would come back, get his head down and let his feet do the talking.

Instead the England international found himself in the middle of an episode with United fans who were hurling abuse his way at full-time — when professional footballers are expected to be able to handle such situations.

Ox walked over towards the fans in question and offered them a ‘handshake’ with a sarcastic smile on his face.

They obviously refused — that would be weird — and this shouldn’t be mistaken as a friendly gesture from the Liverpool midfielder.

Liverpool fans can take the morale high ground here and slate the United fans for being immature, but they’d do the exact same if they were close to one of our players.

Just ask Gary Neville about the abuse they gave him over the years.