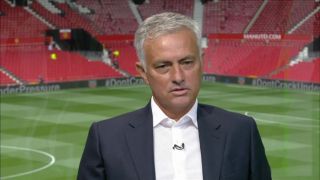 José Mourinho decided to cut into Ole Gunnar Solskjaer while sat in the Sky Sports studio.

The former Manchester United manager, who was replaced by the Norwegian last December, is offering his analysis for today’s game between United and Liverpool.

The Portuguese ironically claimed that his successor has it far easier than he did — as he has been given a job to build for the future — instead of being expected to achieve success instantly.

United are currently winning 1-0 thanks to a first-half goal by Marcus Rashford. The goal sparked controversy because Divock Origi was fouled in the buildup.

Then Sadio Mane scored before the interval and VAR overruled it — and rightly so for handball.