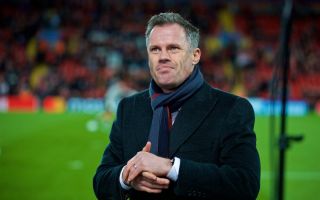 Jamie Carragher doesn’t believe Ole Gunnar Solskjaer is the right man for Manchester United — nor does he think the Norwegian will be sacked this season.

It’s been a terrible start to the season for United, our worst ever to a Premier League campaign.

Solskjaer is the fourth United manager since the departure of Sir Alex Ferguson in 2013 — and Carragher reckons executive vice-chairman Ed Woodward will resist the urge to make another change anytime soon.

Carragher is still unconvinced he is the right man to rebuild United and take the club forward.

The means the job will be “up for grabs” ahead of the start of next season, according to the former Liverpool centre-back.

Speaking ahead of United vs Liverpool on Sky Sports, Carragher said (via the Daily Mirror): “I think that United, with the position that they’re in, Ole Gunnar Solskjaer is fortunate in that they’ve changed manager so often in these last few years.

“The man who’s making those decisions, Ed Woodward, will not want to make another one in terms of changing a manager.

“If you’re asking me if I think Solskjaer is the man to take Manchester United back to winning titles and European Cups, then the answer is ‘no’.

“And if I was a Manchester United fan, I think I’d rather see someone else as the manager at the start of next season.

“But I certainly don’t think Ole will be changed between now and the end of the season, because I feel that would be a mistake, but a certainly feel it’s up for grabs who will be in that dugout come the start of next season, even if United’s form takes an upturn.”

Keane said: “They need some results. It’s great to talk about having a plan but they need results.

“There’s a lot of talk about players who have left the club but Ole has to get more out of the players he has. If you’re not winning football games, the pressure builds. It needs to improve and fast.”

Souness thinks Solskjaer is already at risk of getting the sack, saying, “You can talk about three-year deals and projects but if you have too many bad weekends, you’re out.

“I’m looking at the players and thinking, ‘Who’s going to stand up for him today?’ I think they’re short on that.”

Someone certainly needs to stand out and prove their worth today. Maguire at the back, Fred in midfield and Rashford up front.

I wouldn’t hold my breathe on all three.