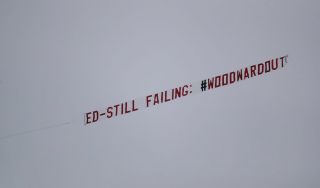 Manchester United fans flew a plane with a banner reading “Ed Still Failing #WoodwardOut” over Old Trafford before the match against Liverpool.

There was a march and protest before kick-off to Old Trafford from the Tollgate pub in Manchester with a banner saying: “Glazers Out. Woodward Out. Over £1b stolen from MUFC.”

The Glazers have taken hundreds of millions of pounds out of the club since their debt ridden takeover in 2005.

Executive vice-chairman Ed Woodward has constantly faced calls to step down with fans blaming him for the poor recruitment and the decline of United in recent years. All warranted as it’s clear that non-football people are making football decisions at the club.

Former Manchester United defender Gary Neville recently said that Woodward shouldn’t be at the club, saying, “I don’t believe the guy [Woodward] at the top should be there doing it anymore, I think he has had his chance but that is another story.”

Check out the images below of the plane banner and anti-Glazer protest:

Woodward can brief the media all he wants, line the pockets of individuals to keep quiet & buy out Supporter’s trusts with access.

However, there are those that won’t be bought & will always put MUFC first. We are the #Glazersout movement and we are here to stay. #WoodwardOut pic.twitter.com/70aTNuwGuM