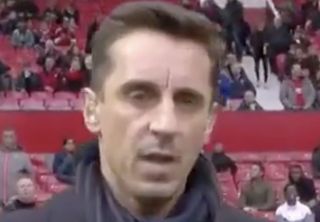 Gary Neville admitted Marcus Rashford’s opener against Liverpool should not have stood.

VAR failed to overruled referee Martin Atkinson’s call that Divock Origi had not been fouled in the build-up.

Victor Lindelof came in from behind and made contact with the Liverpool forward before Scott McTominay came in and scooped the ball to retain possession.

Atkinson allowed play to continue as United broke down the right before Daniel James set up Rashford’s goal.

Jurgen Klopp was seen losing the plot on the touchline as several Liverpool players surrounded the referee.

Liverpool blog Empire of The Kop tweeted their disapproval of the decision, too.

Is Lindelof not fouling Mane prior to the handball though?

Neville was in agreement with Klopp. He said the following while on commentary for Sky Sports (via Daily Star): “I’ve had this problem with VAR all season, it’s a foul.

“Manchester United don’t care, Klopp is absolutely livid but he will be with his team too.

“Manchester United have been better, they’ve been faster but there is controversy.”

On VAR, Neville continued: “They’ve backed themselves into a position.

“We spent two or three hours there and they told us they won’t send the referee to the screen that is in between the dugouts.

“I really thought he was going to over turn it.

“It’s one from behind where you see the toe-poke go into his calf.

“This is the angle, just watch, m he kicks his shin.”

Former Liverpool defender Jamie Carragher is on co-commentary and said: “I’m a big advocate of VAR. I want it to work, I want it to work for the game but there’s no doubt for the credibility of VAR they’re leaving themselves open to be criticised.

“This will be a massive talking points at the end of the game no matter what happens.

“You talk about VAR, I didn’t think it would be over turned. From seeing that this season, Martin Atkinson is in a great decision, it’s actually poor refereeing.”