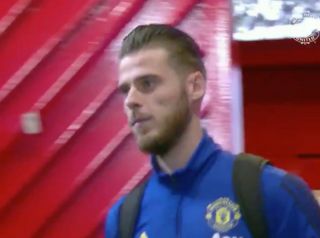 David de Gea starts against Liverpool despite fears over a muscle injury that forced him off whilst playing for Spain earlier this week.

The Spanish goalkeeper has made a speedy return in order to be ready for today’s game, even though most United fans were fully convinced that Sergio Romero would start today’s game.

Manager Ole Gunnar Solskjaer has opted to start the game with three centre-backs, as well as two full-backs, and the midfield itself is very light and lacking in quality.

It looks like a 5-3-2 formation. We could be wrong but this is not something we’ve seen done by Solskjaer in the past. He could switch it to 5 in midfield when with or without possession.

There’s also good news from the bench with Anthony Martial returning from injury.