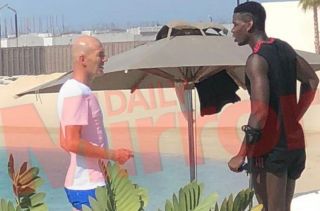 Real Madrid manager Zinedine Zidane insists his conversation with Paul Pogba will remain private and that it was “pure chance” that the pair were together in Dubai.

The French duo were pictured talking in Dubai during the international break. The Manchester United midfielder is injured and couldn’t play for France, while Zidane enjoyed a short break from management.

There has been lots of talk about Pogba joining Zidane at the Bernabeu, so being pictured together in Dubai only adds fuel to the fire, as per the Daily Mirror.

Zidane has refused to confirm whether or not they discussed potentially uniting in Spain.

“My encounter with Pogba was pure chance,” said the Real Madrid boss, as quoted by The Sun.

“As ewe know each other, we talk. And what we’re talking about is personal.

“It’s a conversation between me and him. We’ve known each other a long time.”

You immediately wonder what Solskjaer thinks of this, with his star player potentially missing for the big game against Liverpool this weekend.

He said: “It is a picture and when you are at Man United you get pictures taken of you but I don’t have a problem with that at all.

“Paul wants to stay here and play well and is part of our plan going forward.”

See this, I don’t really believe.

I don’t believe Pogba wants to stay at United and if the opportunity came to join Real Madrid he’d be gone in the blink of an eye.

The 26-year-old has been out of the team a lot the past while with a persistent ankle injury. His last game was the 1-1 draw with Arsenal on September 30.

United have had an awful start to the season — having won just two games in their opening eight Premier League fixtures.

We took a look on Twitter to see what United fans were saying about Pogba being spotted with Zidane.

Most feel the France international will be leaving in the near future.

Probably asking him how many noughts he wants on his contract

Pogba is 100% gone next summer. No way he stays or renews his contract.