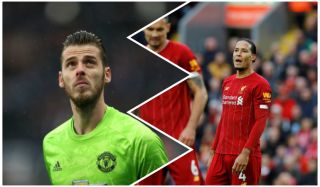 Manchester United are set to take on Liverpool this weekend and Virgil van Dijk has been speaking to the media ahead of the game.

The Liverpool defender has told Sky Sports that he thinks United goalkeeper David de Gea remains one of the best in the world.

Unfortunately, De Gea is set to miss out on facing Liverpool after sustaining a muscle injury on international duty, so Sergio Romero is expected to step into United’s starting line-up.

And Van Dijk admits that he thinks Ole Gunnar Solskjaer’s side are in a bad way at the moment.

“For them, it is not the ideal situation to lose your first-choice goalkeeper, one of the best in the world, and one of their main midfielders,” Van Dijk said.

“They will be disappointed but for us, we just want to focus on ourselves.

“They’re not in the best way, they’re not fully confident and they’re not in the situation they want to be in. But the good thing about football is you can bounce back from it but we know that. We want to go out and fight for every metre on the pitch and try and take the three points back to Liverpool.”

Praise has been a long time in the waiting for De Gea. Last season wasn’t his best and he’s not exactly Spain’s No.1 anymore, but he has been more solid since the start of this campaign.

His absence is still a blow for the Red Devils, though Romero has served United well whenever called upon and deserved to be trusted between the sticks.

Jurgen Klopp’s side have had a perfect start to the new league campaign — taking maximum points from their first eight games.

United will be aiming to put a dent in their title hopes this weekend, although it doesn’t look like Man City are strong enough this term to make it three consecutive titles.

Solskjaer’s side have earned just nine points thus far, and a defeat against Liverpool This weekend could even leave them closer to the relegation zone — currently two points above it.