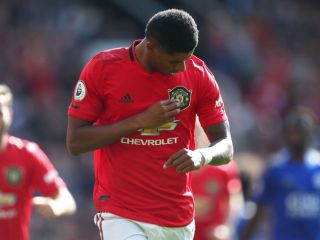 Don’t be fooled by Manchester United’s league position, or Liverpool’s for that manner as this is without question the biggest fixture of the football season.

We are eight games into the Premier League campaign and Ole Gunnar Solskjaer is under severe pressure. If results go the wrong way this weekend United could be in the relegation zone and the Norwegian’s job prospects will look grim.

There’s no denying that and we’re desperate to see Solskjaer succeed. I, for one, still back and will continue to do so for the foreseeable future. The problem sits with the Glazer family and Ed Woodward; I’d much rather see them replaced because otherwise the managerial merry-go-round will go on and on.

Instead of doing the standard previews we produced most weeks on Stretty News, I’m going to look at five things to watch out for as the two biggest rivals in English football come together.

Solskjaer’s misfiring stars to rise for the big occasion

I’ll be very worried about our players if they fail to show up for Sunday’s game.

This is a great chance to prove themselves against a better side and it shouldn’t require much motivation from the manager.

In fact, the pre-match team talk probably won’t require much talking. They should all know what it means to beat Liverpool and if they don’t, again, I’ll be very concerned.

When we dominated the Premier League under Sir Alex Ferguson and Liverpool weren’t all that, very occasionally mounting a challenge for the title, this fixture would still be difficult to call. The Scousers would raise their game as if it was a cup final and we need to do the same tomorrow.

That’s our level now and we must make progress so that we’re not saying the same thing year after year.

I trust Ole to get into the players’ minds prior to kick-off. We need them to respond.

Marcus Rashford to tear Trent Alexander-Arnold a new one… again!

This depends on what role Rashford is given when the team is confirmed. If Anthony Martial returns to the starting line-up, here’s hoping his striking partner starts from the left flank like he under José Mourinho at Old Trafford two seasons ago, scoring a brace and making Alexander-Arnold look like a startled Academy player.

Rashford started on the left for England in the 6-0 hammering over Bulgaria, a match that was ruined by racism and facist gestures from the home support. He’s much better cutting in and could cause Alexander-Arnold the same problems as he did before, especially given how the Liverpool full-back isn’t very good when it comes to defending.

Unfortunately for Solskjaer, Rashford has looked short in confidence these past few months. He hasn’t filled the void left by Martial’s injury and, as a result, United haven’t been scoring enough goals.

The England forward will be buzzing for this game and the right tactical switch could see Liverpool’s defence put under some pressure.

Signed by Louis van Gaal in 2015, Romero has only ever had a bit-part role at United. He played a big part in our successful Europa League campaign in 2017 but David de Gea has rarely been injured, so he’s never had a proper run in the team.

That said, Van Gaal’s best recruit at Old Trafford (not joking) is a safe pair of hands and I’d even go as far as saying the best second choice goalkeeper in the Premier League.

If we lose this weekend, I have good reason to believe it won’t be through the fault of Romero.

David de Gea is unlikely to play after sustaining a muscle injury earlier this week whilst on international duty.

Liverpool set up to keep the ball and cross from deep positions with their full-backs — Trent Alexander-Arnold and Andrew Robertson — and we don’t expect that to change against United this weekend.

Klopp has never won a league game at Old Trafford but they go into this game as favourites, hopeful of keeping their perfect start to the season alive.

Expect Liverpool to play calmly for the first 45 minutes unless United leave gaps open at the back. Klopp’s men usually go big for the 15 minutes of the second half and the Red Devils will need to be cautious of that.

The Scousers don’t need to create much from central positions nor do you see any of their centre-midfielders get into the box either.

Finally, I asked Editor of Liverpool blog Empire of The Kop about playing United away. He said: “It scares me. It’s been our bogey ground, really — even after Fergie left and you guys haven’t been that good. It seems fairly toxic at times but it will be vibrant and Anfield-esque on Sunday!”