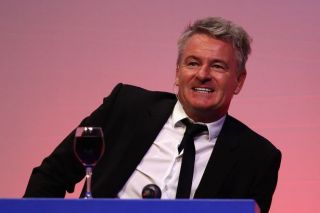 Liverpool head to Old Trafford on Sunday as Ole Gunnar Solskjaer’s Manchester United continue to struggle after a challenging start to the Premier League season.

Sky Sports pundit Charlie Nicholas has given his verdict on the North West derby, predicting what the Scousers could expect, as well as name the United player he feels will “offer something” against the league leaders.

It is without question the biggest fixture in English football — anyone that says otherwise doesn’t have a clue what they’re talking about.

Even though United aren’t having the best of times, Liverpool will be wary of their opponents, knowing what’s at stake with the Red Devils sitting just two points above the relegation zone.

READ MORE: ‘One of the best in the world’: Van Dijk heaps praise on Man Utd star

We need to get on track soon after losing 1-0 to Newcastle before the international break.

In contrast, Liverpool have a 100 per cent record in the league this season. Eight wins from eight, 20 goals scored and just six shipped. This shows what sort of test United have on their hands this weekend but they’ll be up for it… we hope!

Nicholas thinks that United will employ conservative tactics – “a ‘parking the bus’ kind of game” he said — as they cannot afford to take a hammering against their arch rivals, who are in a much better position at the moment. He has also tipped striker Marcus Rashford to do well versus Klopp’s men.

“(Liverpool) have battered (United) on a few occasions and Man Utd still won the title,” Nicholas wrote via Sky Sports. “But this is do or die for Utd and a day of credibility for them to try and get a point, which I think they will do. They will scrap and sit in, Ole Gunnar Solskjaer knows that — they will not play expansively here.

“Man Utd will not want to get beat and walk away. This is a ‘parking the bus’ kind of game, in which they cannot take a risk. If they get beat and Liverpool embarrass them, then it could spell even more danger for Solskjaer. I feel Marcus Rashford will offer something here.”