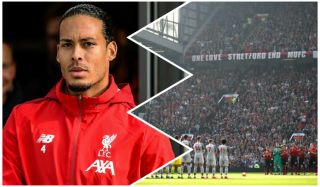 The centre-back is of the view that Liverpool’s biggest games of the season will be the ones that decide the title towards the end of the campaign — and in the Champions League — so it would be extra special to win on Sunday to put a dent in their title hopes.

This fixture, though, is without question the first one fans look for when the Premier League and broadcasting companies release their schedule for the year.

Van Dijk is basically claiming Liverpool have bigger fish to fry, which could be taken as an indirect dig at United.

The Netherland international told Sky Sports: “It’s massive, but it’s more massive for the fans. I think all of the Champions League games are as big as this.

“The whole atmosphere and leading to the actual game is bigger than some other games but I don’t think it’s the biggest of the season.

“The big ones are the Champions League and the ones that are hopefully going to win us the Premier League title.”

READ MORE: ‘Let’s destroy them’: Berbatov explains what it was like in Man Utd dressing room vs Liverpool

Jurgen Klopp will start the Dutchman in central defence at Old Trafford, alongside Joel Matip, who has only returned to training.

The German coach could also opt for Joe Gomez or Dejan Lovren at centre-back but he’ll go with his best option to partner Van Dijk, being the Cameroonian.

It remains to be seen who will start up front for United.

Manager Ole Gunnar Solskjaer will hope to have Anthony Martial back in time as his return should give everyone else a much needed boost.

The only way I see the Red Devils troubling Liverpool’s defence is if Martial plays centrally, with Marcus Rashford coming in from the left and Daniel James on the right.

Bring it on! Believe.