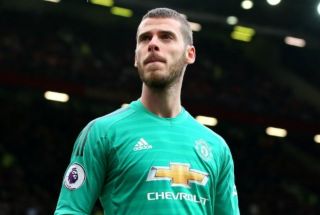 Ole Gunnar Solskjaer has revealed that David de Gea’s injury back is not as bad as first feared.

The Spaniard sustained a groin injury while on international duty this week and has since been ruled out of facing Liverpool on Sunday.

While that is a huge blow for the Red Devils, Solskjaer says that initial fears over how long his goalkeeper could be sidelined for have been allayed.

“I don’t expect him to play, but it was not as bad as feared,” Solskjaer said at his press conference on Friday morning, as quoted by Sky Sports.

“When I first saw the injury I thought, ‘That’s him out until the next international break’ because we’ve had some long-term muscle injuries.”

The Times claims De Gea himself is still hopeful of being involved against Liverpool, but Solskjaer must be wary of risking his No.1 keeper as the last thing we need is for him to aggravate the problem and be sidelined for longer than first suggested.

A different story entirely if he’s given the all-clear from the club’s medical staff.

Should De Gea miss the game Sergio Romero will step in and fill the void. The Argentina international is more than capable and has always served United well.