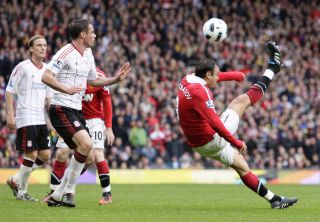 Former Manchester United striker Dimitar Berbatov has revealed what it was like in  the dressing room for clashes with arch rivals Liverpool.

It’s been a bitter rivalry for decades and we wouldn’t have it any other way.

Liverpool are high flyers at the moment — on top of the Premier League, winners of the Champions League — whereas United are twelfth and just two points above the relegation zone.

Manager Ole Gunnar Solskjaer will hope his players rise for the occasion and show the sort of passion and determination expressed by Berbatov (quotes below) to ensure they take the game to Jurgen Klopp’s side and give us fans something to cheer about as we get behind the team every step of the way.

“Sharing a dressing room with the likes of Paul Scholes, Gary Neville and Ryan Giggs, you really knew how important these types of matches are,” Berbatov told Betfair.

“Gary Neville was always up for the games against Liverpool, he was always pumped up and motivated, you could see the way he was preparing before the games.

“We would have a couple of minutes of silence and do some stretching then there would be a burst of energy and he would shout at everyone ‘come on boys, come on lads, lets f***ing destroys them’.

“I would also prepare in my own way and I would tell myself ‘Berba you go out there and give it everything you f***king can’.

“This is my own motivation, I didn’t need anyone to motivate me, I would do it in my own way.

“But when you are out on the pitch and see Gary Neville running his f***king b***ocks off on the right side, Scholsey controlling the midfield and Rooney running like crazy, it is extra motivation, you say to yourself ‘you better f***king be like then or even better or you’re in trouble’.”

It’s important we see fight from the team on Sunday. The game takes place in our back yard and Solskjaer needs his players to raise their game the same way Liverpool used to against us!

Hopefully Anthony Martial returns and starts the game but he has been out injured since the end of August.

Maybe Solskjaer can quickly convince Berbatov to come out of retirement.