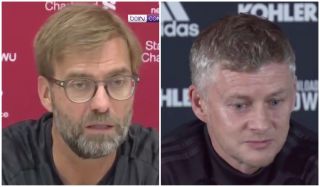 Sunday’s big game between Manchester United and Liverpool has a strange feel to it.

The Scousers are coasting on top of the Premier League table, while we’re sitting in 12th just two points above relegation.

The league leaders haven’t the best record at Old Trafford, not winning at United away since 2014. Jurgen Klopp has only one league win over United since his arrival at Anfield, the 3-1 victory last season.

And form can often be disregarded for fixtures such as this one, so nobody really knows what will happen.

Ole Gunnar Solskjaer has given his pre-match press conference and has sent mixed messages about the fitness of some key players and Klopp reckons he could be playing some mind games.

See the video below as Klopp addressed the media:

Klopp 🗣 “Yesterday, Pogba/De Gea there is ‘no chance’, today it is ‘maybe’, tomorrow it is ‘a chance’!”#beINPL #LFC #MUFC #MUNLIV pic.twitter.com/h3GIBLXCPg

“I’m 100 per cent aware of the strengths of Manchester United. I am expecting their strongest possible line-up.

“Four days ago Ole said there was no chance for De Gea and Pogba. Today it’s a maybe. Tomorrow it’s 100 per cent. Martial will be back, all that stuff. That’s how all these games are played…

“The less your opponent manager knows about you the better.

“In four years in England it is still really strange for me about not knowing whether a player is fit or not. In Germany we all the press to watch training four or five times a week!”