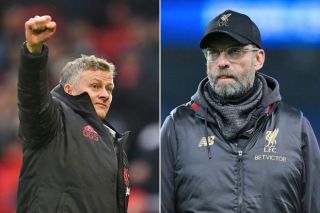 It’s the first match we look for when the Premier League fixtures are released each year.

There isn’t a rivalry in English football quite like Manchester United and Liverpool.

Ahead of the game at Old Trafford on Sunday, Ole Gunnar Solskjaer has suggested this is the “perfect time” for his United side to bounce back from a 1-0 loss at Newcastle.

Maybe he’s right but it just seems wide off the mark given our abysmal form this season.

Liverpool, on the other hand, are flying it on top of the Premier League. Jurgen Klopp’s men will be wary of United raising their game for the occasion, but they will also be rubbing their hands knowing how bad we’ve been this season.

Klopp gave his pre-match press conference this afternoon, and he was asked about the United rivalry.

“How much do I enjoy these type of occasions? A lot! It’s the salt in the soup,” Klopp said, as quoted by the Manchester Evening News.

“It is really great. You would love to prepare a game like this for a full week but we have had international break. For both teams it is the same situation. We have had three or four days to prepare.”

Liverpool could get a boost this weekend with the return of Allison and centre-back Joel Matip.

United are losing players to injury, Liverpool are gaining them through recovery.

Solskjaer will need to get into his players’ heads and rile them on for a win.