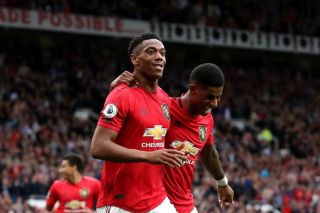 The Red have struggled in front of goal this season and manager Ole Gunnar Solskjaer needs to find a way to ensure Manchester United start winning games again.

Anthony Martial has been out injured and the boss has urged the Frenchman and fellow forward Marcus Rashford to start scoring ‘scruffy goals’.

United have scored found the net just 11 times in 11 games, and four of those goals came in our 4-0 hammering over Chelsea in the opening match of the campaign.

Our lack of goals has promoted criticism of Solskjaer’s decision to sell Romelu Lukaku and loaning Alexis Sanchez to Inter Milan.

Gary Neville asked his former teammate about that decision in a recent interview for Sky Sports and Solskjaer responded with the following: “In one-off games, you think we could’ve had a number of extra players with experience. Alexis and Rom are goalscorer and good players, but at the moment, we made those decisions and they were the right decisions.

“That’s the only way you’ve got to look at it. All the players here want to give everything for the club and for the shirt — that’s a big thing.

“Giving a couple of the lads the chance to show themselves, maybe it was a little bit too early for a few of them. But Mason Greenwood has stepped in and scored a couple in the midweek games, so it’s a great experience for them.

“We know we haven’t had the results that we wanted, but I wouldn’t have kept the players we sold. It was the right decision.”

The boss admits he’s concerned by his side’s lack of goals, which he partly puts down to Martial’s absence in the team.

He added: “There’s many reasons, but one of them is injuries to Anthony [Martial], who started really well through the middle with Marcus [Rashford] on the left.

“Creating chances has been a challenge for us with teams dropping deep. It’s the fine margins as well.

“If you go 1-0 up instead of 1-0 down, when you look at the Harry Maguire and Scott McTominay headers against Newcastle and Arsenal, it’s a completely different ball game.”

There’s no getting away from the fact United need to be more clinical in front of goal. Take Harry Maguire’s headed miss against Newcastle; it would have been a different game had he scored.

But we can’t sit here and argue ‘what ifs’ because that will get us nowhere.

Something needs to be done whether it’s the manager adapting to a new system or changing his coaching methods.

The pressure is building.

“We’re practising patterns every single week and when we get the players fit, I’m going to make Marcus and Anthony score those scruffy goals, as that’s what I did!”

United are back in action on Sunday when we host Premier League leaders Liverpool. Martial isn’t a certainty to feature, though he is expected to return to training before the big game.

The Red Devils are winless in their last four league games and it’s a huge ask for them to beat Jurgen Klopp’s men. Solskjaer is determined to beat the odds as a win would give the lads a much-needed confidence boost.

Asked if he’ll play two strikers if Martial is fit, Solskjaer replied: “I’ll need to make a decision on Anthony. He’s not trained with us yet, he’s still working with the physios and the fitness coaches. Marcus hasn’t come back from internationals yet, so we’re probably not ready to play the two of them together. They might have to share the load.”

Rashford certainly looks like he belongs to wide positions more and with Martial on his way back to full fitness, hopefully we’ll see him take back the centre-forward role and threaten teams like he did prior to the injury that has kept him out for so long.