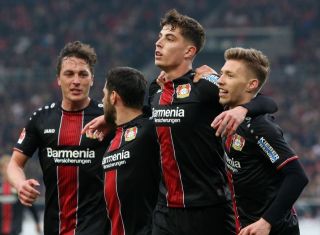 The Germany international has broke through as one of the most exciting young players in Europe and he’d be a fine addition for any side in the Premier League, and United are in desperate need of creative spark through the middle.

Fans have grown tired of Jesse Lingard starting games and offering zilch in front of goal. Juan Mata is kicking on and is less effective in games, whereas Andreas Pereira doesn’t quite cut the mustard for a United player.

Havertz has recently been linked with both United and Liverpool by the Daily Express for approximately £90m, which seems to be the going rate for highly-rated prospects these days.

Still only 20-years-old, this is Havertz’s fourth season in the first-team for Leverkusen, having racked up 31 goals in the process.

For Germany he has seven caps and one goal but it’s only a matter of time before Havertz steps up to a bigger club — and plenty will come knocking for his signature!

Bosz seems resigned to losing his star player and has given the likes of United hope by admitting any transfer decision would be out of his hands.

“Of course I would like to keep him, just as I would have liked to keep Julian Brandt, for example,” the Leverkusen manager told Sport Bild, as translated by the Daily Mirror.

“Kai is only 20 and still has room for improvement. I can help him there.

“Buy it is like this, at the end the player himself must feel when he is ready for the next step. Nobody can decide that for him.”

The German midfielder will be on the list of many clubs this season, but you feel United need to be in the Champions League to attract this sort of player.