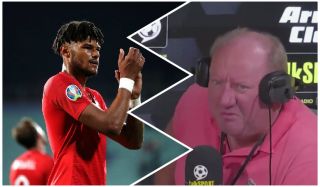 The Red Devils are struggling this season and sit in 12th ahead of their Premier League meeting with rivals Liverpool on Sunday.

Brazil thinks he should continue this strategy by raiding Villa.

“They [United] could do worse than Mings, Grealish and McGinn if they are going to spend a couple of hundred million,” the footballer turned radio host said on talkSPORT.

“If you are Ole and you go to Ed Woodward that is who I would want. Do you not think those three would improve Manchester United?

But would three of those players help bridge the gap to Liverpool and Man City? Probably not, but it would be a step in the right direction, and it could be argued as part of the process.

Brazil’s co-host Ally McCoist responded to the claims, saying, “Of course I do [think the three Villa players in question would improve United].

“But here’s my question: would those three make Manchester United better? Yes, of course they would.

“But would they make them better so within a year they would challenge Manchester City and Liverpool?”

McGinn has been linked with a move to Old Trafford and has really impressed us this season with the newly promoted Premier League outfit. The Scot makes things tick in the middle of the pitch and United need someone like that.

As for Grealish, I’d prefer James Maddison but Mings had a solid debut for England on Monday night against Bulgaria and may be worth considering.