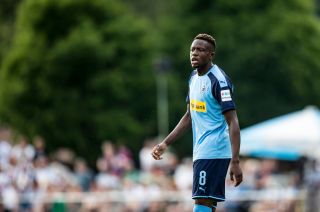 There’s a new name being linked to Manchester United this morning as Ole Gunnar Solskjaer as his scouting network prepare to continue their rebuild of the squad.

Investment is needed at Old Trafford as the Red Devils sit 12th in the Premier League, just two points above the relegation zone and a defeat to league leaders Liverpool this weekend would add further embarrassment to our season thus far.

The Daily Mail claims United will back Solskjaer with six new signings over the next two transfer windows, with the likes of Lyon’s Moussa Dembele and Juventus forward Mario Mandzukic lustred as potential targets.

Though a new player has seemingly emerged on the radar, brought to our attention this morning via German outlet Bild.

Speaking previously to the official Bundesliga website, Zakaria compared himself to Paul Pogba, saying, “I’ve been compared to [Patrick] Vieira and Pogba — two more players I really respect and, in a way, see as role models. When I watch videos of them I think I’d like to play that way.”

Going into further detail about his game and playing style, the Switzerland international said: “I love to win back possession and I also like carrying the ball and taking on opposition players, but I need to be more efficient, score and assist more goals and improve in the air. I’ve proved myself to be a quick learner, and I’m in the best place to learn fast.”

It sounds like Gladbach have found a real pearl and United need to improve in midfield to make any progress.

There are so many young talented players in Germany, let alone Bayer Leverkusen at the moment, with United also said to be tracking 20-year-old Kai Havertz.