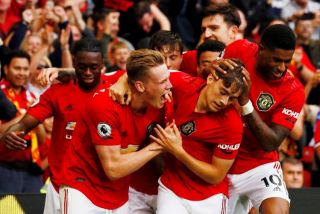 The 22-year-old has become a regular under Ole Gunnar Solskjaer this season after being brought from the Academy into the first-team by former manager José Mourinho.

In terms of goals contribution, McTominay hasn’t done too poorly. A cracker from distance against Arsenal while providing an assist against Southampton means he is off the mark, but even he will know at this stage more is expected at United.

Speaking ahead of this weekend’s huge fixture between United and Liverpool, Robertson hailed his international team-mate.

“He’s been excellent all season in a United team that has had its critics,” the Liverpool left-back said, as quoted by Goal.com. “I think he’s carried himself very well. I’ll be looking forward to facing him on Sunday. Obviously, I hope to come out on top.”

This was said following Scotland’s 6-0 win over San Marino, during which McTominay provided two assists.

Sky Sports have uploaded an interview with McTominay (see below) ahead of the Liverpool clash and he reveals how Mourinho has stayed in touch with him despite being sacked by last December.

With Paul Pogba ruled out, McTominay is certain to start this weekend vs the Scousers.