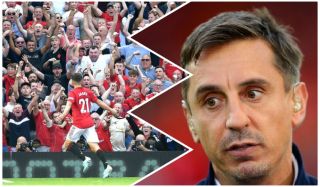 Gary Neville has admitted that the atmosphere at Anfield when Manchester United travel to take on Liverpool is better than at Old Trafford.

Though saying that, the atmosphere when United are playing away from home is usually better than it is at Old Trafford, so he’s revealing nothing of a surprise with these comments.

“I always think that when you look at the Liverpool vs United game, the game at Liverpool is always much more fiery and emotional than a game at Old Trafford,” Neville told Sky Sports.

“Atmosphere, emotion, feeling; it took me years to get used to playing at Anfield. Years.”

“I always felt the atmosphere was better at Anfield,” Carragher said., “The Kop when you’re coming out, ‘You’ll Never Walk Alone’.”

I could be wrong, but hopefully Sunday is different.

We go into the game strangely as underdogs and the fans have a big role to play.

It’s early days but it would be great to put a dent in Liverpool’s title hopes as it’s often been the other way around in the past two decades — with them trying to ruin our hopes of lifting titles. Thankfully we usually went on to win those leagues and dominated under Sir Alex Ferguson.

Ole Gunnar Solskjaer has to select from an injury hit squad, though, and the timing of this game very much swings in Jurgen Klopp’s favour.

If everyone sticks to their job on the pitch, who knows? We’ve got to get behind the lads.